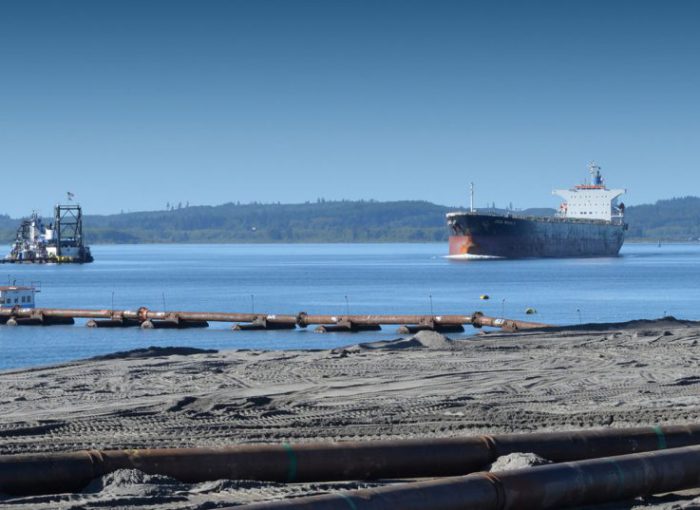 The vessel was built in 1943 as a river tugboat designed for towing on the Mississippi River. In 1965, Bauer Dredging Company converted it to a dredge, and it has served the Port of Portland ever since. Although the Dredge underwent consistent maintenance over the years, it had mostly looked the same—until 2021.

“The Dredge goes in every five years for upkeep. In 2015, we replaced the main engine and diesel generators. This time, we needed to perform major structural work on the stern. We basically cut off and replaced the back third of the vessel,” said Chet Thomas, manager of special projects at the Port.

The work, which took place during 2020 into 2021, actually began years before. In 2016, the Port hired naval architecture and marine engineering firm Glosten to analyze the remaining lifespan of the Dredge. After extensive review, Glosten reported that a majority of the steel in the stern of the boat needed to be replaced.

Thomas stressed the vessel or those who worked on it were not in danger. “The worst-case scenario would be structural failure: severe cracking, that kind of thing. And even if that happened, it wouldn’t result in anything like sinking. What it could result in was an unusable Dredge, which wasn’t an option for the Port.”

The answer? A high-tech version of “measure twice, cut once.”

After Glosten designed a new stern, the Dredge was laser scanned to verify the measurements. The Port contracted with Portland-based Vigor Industrial to construct and install the new stern. Vigor removed the old stern, moved the new one into place, and built the steel framing to connect everything together.

What does a Dredge do, exactly?

The season for dredging typically runs from early June to November or December.

Every year, the Army Corps of Engineers surveys the Columbia River and seeks out spots where sediment has settled and made the river too shallow for commercial ships to sail through. The Dredge Oregon is not the only boat dredging in the Columbia, but it is the only one that removes material from the river and moves it onto dry land; the others store it within the vessel.

Part of the renovation involved major changes to the Dredge’s spud system. Spuds are how the boat moves: It’s held in place while dredging material from the river bottom by metal pillars (the spuds). Then winches, or cables, pull the boat from left to right in an arc, advancing in a crab-walk motion about seven feet at a time.

The Dredge’s updates include a new hydraulic system made by a Dutch company, Royal IHC. It’s more efficient and most importantly, safer in both operations and maintenance, said Don Tjostolvson, Port navigation director.

“The whole system is simpler mechanically because it’s hydraulic. It doesn’t require anyone crawling up the structure to service it. You can do it all from the control center on deck,” he explained.

Like many home improvement projects, once it’s started, unexpected issues have a way of making themselves known.

Building a new stern is one thing, but fitting it into old construction can create issues, Thomas said. “Every time you remove unusable steel, you find more areas that need to be replaced. We could make certain assumptions beforehand but couldn’t fully know until we saw what was underneath.”

Timing also became a concern. Although this project was planned and the team at Vigor was ready to tear off the old stern prior to COVID-19, shipping delays from Europe occurred. The team opted to defer construction by a year to secure the vessel’s availability for dredging during the season: A cut-up Dredge couldn’t help anyone.

Vigor began the work last fall and completed it in time for the 2021 season to begin in mid-June. And the updated Dredge is extremely elegant, explained the team. In addition to the updated safety measures, the vessel now features an increase of 13% in fuel capacity, which can help decrease the frequency of fuel deliveries to the dredge which are made by barge. This leads to cost savings over the course of a dredging season.

Also, the Dredge has reduced noise in crew working spaces. “With the previous spud hoisting system, the machinery was installed in a shared space with working crew members. But with our new system, the spaces are separated,” explained Thomas.

“We worked hand-in-glove with the Port,” said Brad Lamkin, a marine construction engineer at Glosten. “Chet and the team were essentially part of our office. Even during COVID-19, we didn’t skip a beat.”

This project has been crucial to update navigation operations, but it’s certainly not the only one: The team is actively working on modernizing equipment and processes, said Tjostolvson, and contemplating what a future Dredge could offer.

“I see a plan that’s even more efficient and brings us into the future with a modern system. That will also help us attract young folks into the trade and connect with communities throughout the Columbia River area. There’s a lot of good happening in the next several years,” Tjostolvson said.

Thomas added that when the Port was formed back in the 19th century, its primary purpose was to dredge the river. Back then, the deepest dredging stopped at 12 feet. Currently, the Dredge maintains the river to a depth of 43 feet to accommodate today’s ships.

“It’s striking, how much we have changed the landscape of the river over centuries. That’s because we are working to create more efficient and sustainable dredging for years to come,” he said.