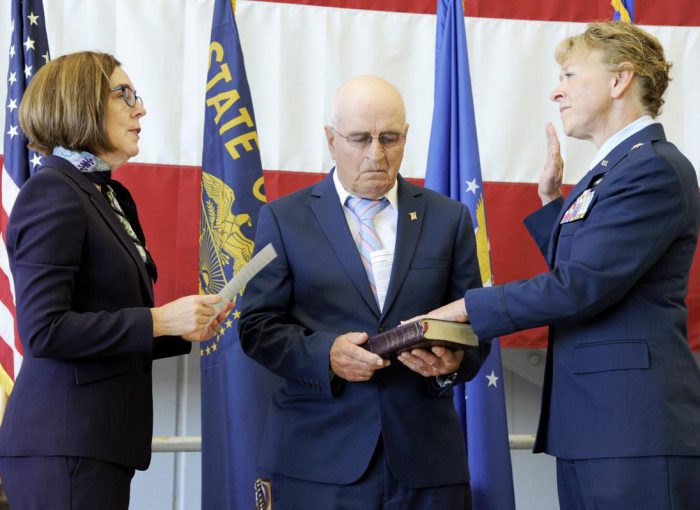 When she’s not wearing military fatigues, you’ll probably find her helping a traveler in Portland International Airport. Learn more about our Donna Prigmore and some big roles she serves.

What are your duties as brigadier general?

I assist the adjutant general, Maj. Gen. Mike Stencel, who commands approximately 6200 soldiers and airmen in the Oregon Army and Air National Guard. My duties include strategic planning, public speaking at community events, command and control during natural disasters, and projects as assigned by the adjutant general. I also assist the commander of the Oregon Air National Guard, Brig. Gen. Kriesel, with the management and oversight of the two F-15 flying units in Portland and Klamath Falls.

As the first woman to achieve this rank in the Oregon Air National Guard, what challenges and opportunities have you experienced as a woman in the military?

I don’t believe I’ve faced any more challenges than anyone else, male or female, in the military. I have never been one to focus on gender, but rather, my focus has always been on just plain grit and hard work. I never wanted to be average, so I just tried to go above and beyond what was expected; especially in a male dominated environment where at times, I felt I had to prove myself. My parents both had a strong work ethic, so I give them a lot of the credit. They were good role models.

What is your role at the Port of Portland?

I am the senior manager of Portland International Airport passenger terminal experience. In this role, I manage two different departments, terminal operations and customer relations. In these departments we are responsible for a myriad of systems and programs from the baggage handling system to janitorial services, and art and entertainment to the customer call center team…just to name a few. I am also one of three supervisors who oversee 14 airport operations specialists who are responsible for ensuring safe and efficient operations in the terminal and on the airfield, as well as meeting Federal Aviation Administration rules and regulations.

How do you achieve work-life balance in your military and Port roles?

Working full-time at the Port and being a member of the Oregon Air National Guard as a reservist is an absolute privilege. Although having two jobs is taxing at times, I love being able to serve my state and country while simultaneously working at the Port in the aviation operations department. Finding work-life balance is definitely a challenge, but it was more of a challenge when my two sons, Nathan, 24, and Brian, 22, were much younger. They are grown now, so it’s easier for me to achieve more of a balance in my life between work and play. I love to work, but I also enjoy things like kayaking, photography, golf, and spending time with my two wonderful sons!

What made you decide to pursue military service?

I was born and raised in the small town of Saco, Maine. My parents didn’t have enough money to send me to college for four years, so I joined the Air Force as a means of paying for it. It took me eight years to accomplish my undergraduate at Arizona State University and MBA at Oklahoma State University, because I had to work full-time while taking evening classes for most of my academic journey. I like to tell that story to young people to teach them that getting a degree IS possible, even if your parents can’t fund it.

What are you most proud of in your involvement in the military?

I am most proud of the five years I served as the director of Camp Rosenbaum, a triad-based partnership between the Oregon National Guard, Home Forward (formerly the Housing Authority of Portland), and the Portland Police Bureau. Camp Rosenbaum is a camp based on developing and building good citizenship and life skills among underprivileged and at-risk youth, ages 9-11.

What are your future aspirations with the military?

I have three years of military service left and I want them to be impactful. As a brigadier general now, I’m hopeful that I can help provide the critical resources that our hard-working airmen need and deserve. I also hope to be an inspiration and a mentor to other women in the military. When I have conversations with them, I tell them that if I can become a brigadier general, they can too. I encourage them to set goals, find a mentor, muster all the grit they can, work hard, have integrity, and never give up. Being able to mentor and coach young female officers puts wind in my sails, and hopefully, theirs too! 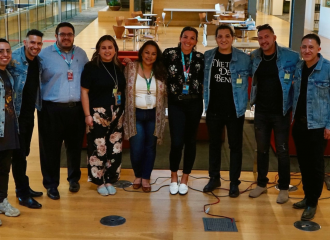 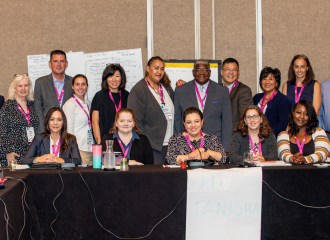